A Heritage Of Music 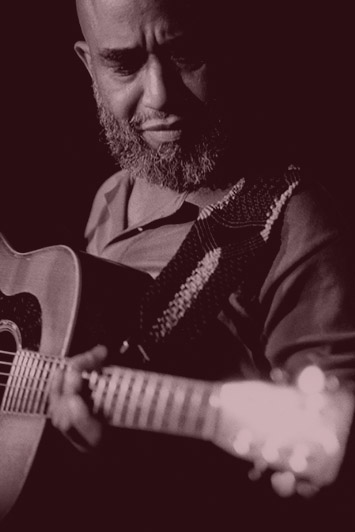 To truly understand the life and professional career of Josh White Jr., one must have more than mere passing knowledge of the life and career of his father- the world-renowned Josh White. By the age of four, Josh Jr. was performing up and down the Atlantic seaboard with his legendary father. At the age of nine he landed his first role (a role for which young Josh won a Tony award) on Broadway, playing his father’s son in “How Long ‘Til Summer.” Josh White Jr. was born into a life of performance. A heritage of music is his legacy.

Joshua Daniel White Jr. was born in New York City, on November 30th, 1940; as his father was in the midst of cultivating a long-enduring relationship with President Franklin D. Roosevelt (Eleanor Roosevelt was godmother to Josh Jr.). At that time, Josh Sr. was referred to as the “Presidential Minstrel.” In 1941, he was the first Afro-American artist ever to give a White House Command Performance. His road to such luminary status was long and arduous, indeed.

Born in the ghetto of Greenville, South Carolina in 1914, Josh White Sr. was born to an impoverished family. His father, the Reverend Dennis White and his wife Daisy were unable to support their family of seven on a preacher’s income. A white bill collector came to the Reverend’s house one day, demanding payment. As was the custom of the day, the Reverend asked that the man remove his hat upon entering the household. Instead, the solicitor rudely spat upon the floor. Enraged by such behavior, Reverend White promptly threw the man out of his house.

Shortly thereafter, the bill collector returned, accompanied by an officer of the law. Together, as Josh looked on in horror, they severely beat Reverend White, before hauling him off to jail. There, Reverend White was beaten again, sustaining injuries so critical that he was he was eventually committed to an insane asylum. He escaped from the asylum once, eventually making his way home. However, he was re-captured and returned to the institution, in which he later died. His destitute family was left to fend for itself.

Daisy White, after praying over her decision, consented to allow seven-year-old Josh to take a job as a “lead boy” for a blind musician. For four dollars a week (which he sent home to his family), Josh and the musician would travel from town to town where they would play on streetcorners, during the day. Barefoot, hungry dressed in no more than rags, Josh would sing, dance and play the tambourine, with which he would collect coins, cajoled from bystanders and passersby as the blind musician played his guitar and sang.

At night, the performers would hide in fields or at safe houses, avoiding  the Ku Klux Klan or other marauding gangs. Joshed was witness to a lynching and saw a black man burned at the stake. While hiding out at night, at the feet of various masters, Josh slowly learned how to play guitar himself; ultimately developing his own unique style- as well as amassing an extensive repertoire of spirituals, blues, work songs, field hollers, prison songs and other folk songs 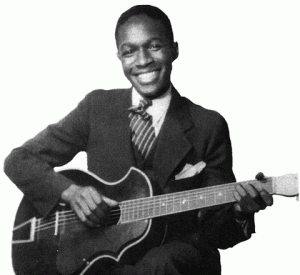 Over the next nine years, young Josh traveled all over the Southeast, as far west as Tennessee,  leading a total sixty-six different blind performers across the counteryside, including Blind Lemon Jefferson, Blind Blake, Blind Joe Taggert and Blind Man Arnold. In 1928, while still only thirteen years old, young Josh, accompanying Blind Joe Taggert on guitar and vocals, made a series of landmark recordings on the Paramount label. Josh continued to make records from then on, often employing pseudonyms such as “Pinewood Tom” or “The Singing Christian.” By 1932, at the age of eighteen, he was recording for the ARC label in New York, using his own name.

Josh White Sr. recorded over one hundred albums in his lifetime. In 1944, he was the first Afro-American to sell a million records, with his hit song “One Meatball.” A short list of the songs he recorded, over the course of his career, which later became part of the American music vernacular, would include: “House Of The Rising Sun,” “St. James Infirmary” “Nobody Knows You When You’re Down And Out,” Careless Love,” “John Henry,” “Frankie And Johnnie” and the controversial anti-lynching song “Strange Fruit,” which Billie Holiday later made into a hit, as well. He was the first black man ever to book a concert tour in the United States. 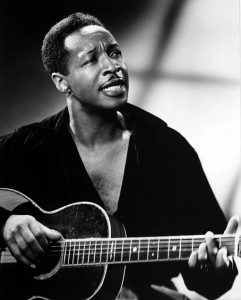 Josh appeared in many Broadway productions, starting in 1939, with John Henry, in which he starred with Paul Robeson. He also appeared in many films. He was a close confidant to President Roosevelt, frequently accompanying Eleanor Roosevelt on trips abroad; playing for kings, queens and heads of state. It was into this environment that Josh Jr. was born.

However, after the war, after President Roosevelt had died, Josh’s association with Robeson (his daughter’s godfather), as well his outspoken stances on segregation, racism and social reform, caused his name to surface before the House Committee on Un-American Activities in 1950. He was promptly blacklisted within the entertainment community and, for many years, could not find work.

Josh White Sr. was eventually able to resurrect his career, to some extent, in the late ‘50s, during the Folk revival, billing himself as “The Father Of American Folk Music.” He was to have an influence on Rock musicians, as well. Bob Dylan recorded “In My Time Of Dying,” a song which Josh had popularized in the ‘30s. The Animals had a hit with “House Of the Rising Sun” during the British Invasion of the mid-’60s.
Josh White Sr. died in 1969, never fully regaining his former fame, nor receiving the acclaim he deserved. He was fifty-four years old. Beside his own extensive legacy as a musician, Josh White Sr. left his son a heritage steeped in the Afro-American tradition that extends back to the Post-Civil war era. Josh White Jr. inherited far more than just a name and a large catalog of songs.

Even as an infant, Josh Jr. was never far from his father’s side. Being one of five children, he learned at an early age just how to garner the attention of his father. Soon enough, Josh Jr. was performing with his father at New York City’s renowned Cafe Society- reputed to be America’s first integrated night club. Josh Jr. performed with his father for five years, traveling up and down the Atlantic seaboard. It was at that point that he won the part in How Long ‘Til Summer. Until his father’s death, Josh Jr. continued to accompany him on concert tours around the world. 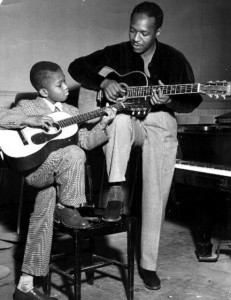 Josh Jr. attended the famed Professional Children’s School in New York, a classmate of Elliot Gould, Christopher Walken and Marvin Hamlisch, among many others who later achieved fame as entertainers. Hamlisch was a co-writer of Josh’s first solo recording (he had previously recorded with his father on several occasions), “See Saw,” recorded in 1956 for the Decca label.

Josh Jr. was also in demand as an actor. He won a special Tony award for “Best Child Actor” for his performance in How Long Til Summer, in 1949. He went on to act in The Man in 1950 with his father; and in “Touchstone” in 1955. In 1957, following Billy Gunn and his friend Lou Gossett Jr., Josh Jr. was the third actor to assume the starring role in Take A Giant Step, the celebrated, long-running off-Broadway play.

He went on to perform with Nehemiah Persoff in “Only In America” in 1959. Also in 1959, Josh Jr. took a role inThe Long Dream, written by Richard Wright and directed by Lloyd Richards; a play whose cast included Al Freeman Jr. and a very young Clarence Williams III, who later went on to star in the ‘60s television series “Mod Squad.” Josh shared the stage with many well-known actors, including Bea Richards, Arthur O’Connell, Patty McCormack and Godfrey Cambridge.

Also a television actor as well, by the early ‘60s, Josh had performed in more than fifty American television presentations. He was also a co-star in his father’s British television series, “The Josh White Show.” However, acting opportunities for a young black man in the early ‘60s were infrequent. The burgeoning Folk music revival of the time (fostered, in part, by his father) offered far more opportunities. So, Josh temporarily retired his acting career and resumed his musical career, in this instance, as a solo performer.

He released a series of singles throughout the ‘60s and one Long Play record of note, The Josh White Jr. Album, on the United Artists label, in 1967. He released Josh White Jr. on the Vanguard label in 1978. During those two decades, he made numerous singing appearances on such popular television shows as “Hootenanny,” “Today,” “The Merv Griffin Show,” “The Steve Allen Show” “The Joey Bishop Show” and “The Mike Douglas Show,” among many others. In 1979, Josh starred in his first PBS special, Ramblin’ With Josh White Jr., while co-starring in several other PBS specials, as well.

During that same time, he made over two thousand concert appearances at colleges across the country- becoming one of the most celebrated artists to play that circuit. Josh was dubbed the”Dean of College Concert Attractions.” Hundreds of thousands of students were among his audiences.

In 1963 Josh White Jr. married Jackie Harris. Together they had two children, Joshua III born in1963, who later became an actor and playwright; and Jason, who was  born in 1969. Jackie died just two years later, in 1971. Josh eventually moved with the boys to the Detroit area in 1976, remarrying in 1978. 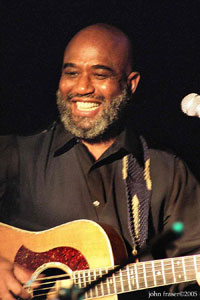 In 1983, Josh returned to the stage, appearing in numerous productions, including the musical biography of his father, Josh- The Man And His Music, written and directed by Peter Link, a longtime Broadway veteran. In 1984, PBS aired a special presentation which documented the creation of the musical. Occasionally, Josh still tours with roadshow productions of the play.

In the years since, Josh has continued to tour and perform on the stage, as well as to occasionally record new albums, including House Of the Rising Son, a tribute to the songs of his father, released in 1999, and Cortelia Clark, released in 2000, both on the Silverwolf label. In the Summer of 2001, Josh joined Odetta and Ramblin’ Jack Elliot for Glory Bound, a roadshow tribute to Josh White Sr., Leadbelly and Woody Guthrie. The show continued through 2002

Josh has won numerous honors and awards over the years. In 1984 he was given the “Harry Chapin Humanitarian Award” at Opryland in Nashville, as well as widespread acclaim for his work with communities and schools across the country. In 1991 he helped to create an interactive alternative education outreach program that was long popular with various scholastic organizations.

Now in his sixties, Josh White Jr. has spent his entire life on the stage, in the spotlight. Instead of standing in his famous father’s shadow, Josh Jr. has not only shed light on that great and illustrious career, but has cast a long figure of his own across six decades. He continues to carry on his rich legacy of song into the 21st century- a heritage of music that lives on, across all generations.